You are here: Home / repub / Repub Breaking News / Testing Trump: Assad Gathers Militias Along The Euphrates Across From U.S. Forces

CNN reported that Pro-Assad forces have gathered on the east side of the Euphrates river near Deir ez Zor. Just a month ago militias and mercenaries loyal to Bashar al-Assad attacked American Special Forces and their anti-Islamic State proxy the Syrian Democratic Forces (SDF).

First on CNN: Pro-Syrian regime forces have once again recently begun massing east of the Euphrates River near where US troops are advising the SDF, US officials tell CNN. The area is very near where pro-regime forces attacked US/SDF troops last month, resulting in US airstrikes

The “battle” happened on Valentine’s Day, but by all accounts sounded more like a massacre. The Russians denied any involvement in the attack raising some questions as to just how much control Moscow has in Syria. This also comes after an alleged string of chemical weapons attacks and brutal campaign by Assad to retake the opposition enclave in Eastern Ghouta. Assad is testing the White House and the last time the regime tested this administration it turned out to be a miscalculation.

Replying to @Charles_Lister and 2 others

Consensus view within U.S.-convened #Syria “core group” is that any mass casualty attack utilizing chemicals would be strong grounds for a punitive military response.

Chlorine use in #EasternGhouta tonight = a big test.

In addition to testing #Trump admin/international resolve re. #chlorine & #EasternGhouta bombing, the #Assad regime is now also escalating in eastern #Syria – significant troop deployments have arrived opposite U.S/#SDF positions along the #Euphrates (acc. to @CNN).

America and the SDF have halted operations targeting what’s left of the greatly diminished Islamic State in Syria. The Euphrates serves as a natural boundary for the US to create a buffer zone so that Iraq can rebuild after ISIS came in from Syria in 2014. It makes no sense to leave just to watch it all collapse again as Assad has proven time and again he can not control his own Eastern Desert. The Kurds and Arabs who live East of the Euphrates have co-existed in relative peace since the SDF took control of the area.

The reasoning: the operation had slowed down for some time, but since Afrin came under attack by Turks & jihadists, they decided it is not beneficial to continue the operation.

SDF will transition from offensive to defensive positions in the pocket where ISIS remain.

The SDF operation against ISIS have for the first time been halted.

ISIS in Syria will remain for some time, this is due to Turkey’s attack on Afrin. pic.twitter.com/nfFlzCSfDl

However, the next day it was reported 1700 SDF fighters took off for Afrin to fight against a Turkish incursion into the autonomous Kurdish enclave. If true this means 1700 trained fighters went to help the Kurdish Marxist known as the People’s Protection Unit (PKK) which is a designated terror organization according to the United States Government. Something Ankara will absolutely not tolerate as it has been fighting the PKK since 1984. 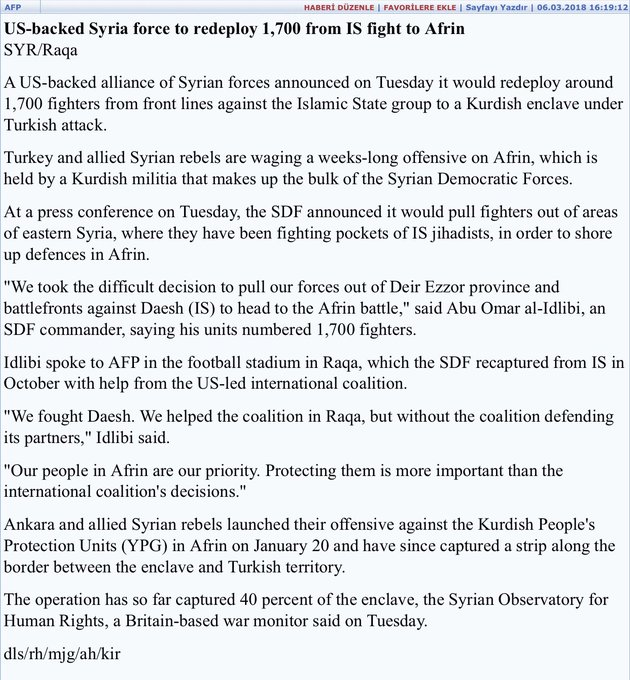 Let’s see how the Pentagon would respond to this announcement since they have been saying that they would cut support, recollect arms if the target isn’t ISIS

Crossing the Euphrates has been somewhat of a pornographic fantasy for militias loyal to Assad. Youtube, rightly removed a video title “Tiger Force Crosses the Euphrates” which was blatant propaganda but it can still be found in the dark conspiracy corners of the internet like LiveLeaks. There’s a good chance this is all a stunt, but besides giving Assad the impression that the US is somehow vulnerable East of the Euphrates because almost 2000 SDF fighter went to Afrin it also complicates an already strained relationship between Turkey and the United States.

This all started a couple of days ago when the … END_OF_DOCUMENT_TOKEN_TO_BE_REPLACED

The resignation yesterday by National … END_OF_DOCUMENT_TOKEN_TO_BE_REPLACED